DURING the mid-’60s, San Jose’s population was somewhere around 140,000. Much of what’s now the southern half of the city was a vast expanse of orchards. Many people plied their trade in fruit canneries. Kids rode their bicycles across wide-open territories to pick apricots in their spare time. SJSU’s track team was kicking ass. The car dealerships and the big box retailers were just beginning to move from downtown to the suburbs. Highway 280 didn’t exist yet. The British Invasion bands were blasting across the airwaves.

In 1964, a rambunctious teenager from Dublin, Ireland, named John Byrne arrived in the city, went to Pioneer High School and eventually wrote a song called “Psychotic Reaction” for his band, The Count Five. The rest is ignored history.

“Psychotic Reaction” was the Count Five’s only major hit, peaking at No. 5 on the Billboard Top 100 in 1966, but without exaggeration, it put San Jose on the pop-music radar. The tune is listed in the Rock and Roll Hall of Fame’s 500 Songs That Shaped Rock & Roll and still stands out as a classic raucous teenage precursor to many psychobilly and horror-inspired punk outfits of later decades.

Gonzo rock scribe Lester Bangs initially referred to Count Five as a “bunch of young guitar-slappin’ brats from some indistinguishable California suburb,” admitting he hated “Psychotic Reaction” at first, but that after awhile, the tune completely grew on him.

The most famous image of the Count Five was, is and shall forever be its celebrated publicity shot on the front lawn of the Winchester Mystery House with each band member sporting black, Dracula-style capes and trying to look ghoulish. At that time, the Mystery House didn’t have a fence around it, and the band had no problem getting permission to take the shot and use it on the back of its debut record.

For 1966, it just did not get any more “San Jose” than this, and with said photo, Count Five achieved a certain illustrious wacky prominence that current local bands can only dream of aspiring to. Count 5 never went on to achieve anything more than cult status, and as the sordid story goes, Byrne insisted on putting his college studies above the band. The group made a famous appearance on American Bandstandwith Dick Clark but reportedly turned down a million smackeroos from the William Morris Agency to go out on tour, opting to remain in college with hopes of avoiding the draft.

Sadly, Byrne passed away last December at the age of 61, following kidney and liver failure, leaving his family with a mountain of bills to pay. As a result, a tribute show takes place this Saturday at the Avalon Nightclub featuring the remaining members of Count Five along with several old friends. Also appearing will be ’60s San Jose rockers Syndicate of Sound and members of Chocolate Watchband, another local fave from that same decade.

Originally, those bands all got to know each other by constantly performing at teen clubs, which were the predominant places to play in San Jose during the mid-’60s. For an indistinguishable suburb, the scene was pretty damn raging, and the teen centers always packed in the crowds.

“That’s where all the music was,” recalls Count Five bassist Roy Chaney. “You could play, like, the Continental Ballroom, for people up to 20 years old. In fact, 21 was about as old as they got. There were a lot of young people. There were places to play back then. Now’s there’s really no place to play in San Jose. We found it harder and harder. There used to be places everywhere, downtown [and other places], but now it’s just so tight, there’s just no place to play.”

Although Count Five never achieved lasting commercial success, the members have never stopped playing music. Chaney and the bunch have consistently rehearsed in Phil Indivina’s garage-turned-studio in Campbell for nearly 30 straight years, and later this year they are set to lay down tracks at Robert Berry’s studio, also in Campbell. Saturday, they will play some of Byrne’s songs from the ’60s and ’70s. Byrne himself was writing music until almost the very end and had recently recorded a tune, “John Joseph Jesus,” with the San Jose rap group Rhymetite, which will perform it during the tribute show.

This author last saw Count Five when the band appeared at the 2006 San Jose Rocks induction ceremony. For that show, Byrne appeared in a wheelchair with dark sunglasses but still pulled off the vocals for “Psychotic Reaction.” The video can be seen at www.sanjoserocks.org. 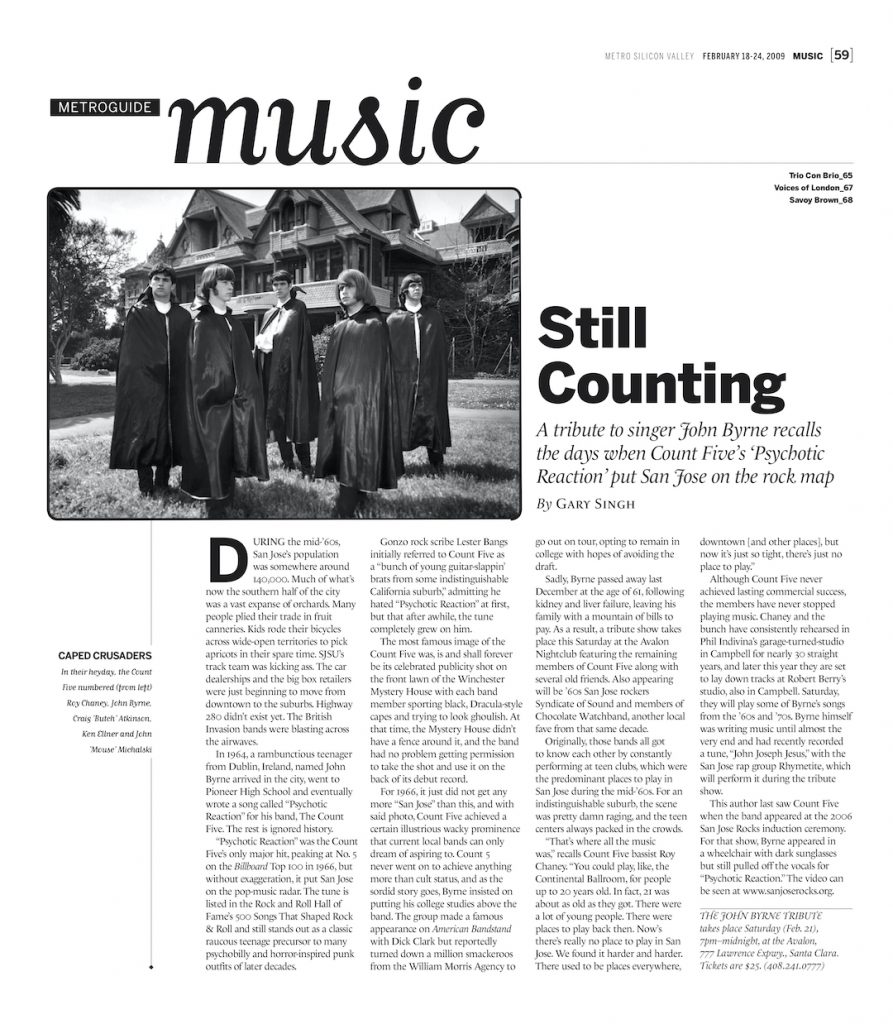