But when his friends, fans and comrades from the ’60s rock ‘n’ roll trenches gather tonight at Santa Clara’s Avalon nightclub to raise funds for his family, they won’t be grieving Byrne’s death in December at age 61; they’ll be celebrating his life.

“Musicians are positive people,” said bassist Bob Gonzalez of Syndicate of Sound, whose San Jose-spawned hit “Little Girl” scaled the charts a few months before “Psychotic Reaction.” “When we lose one of our friends like this, we can think of no better way to celebrate their life than to put on a great show.”

And to raise money for a good cause while they’re at it.

Dan Orloff — a PR professional, drummer for Black Pearl and co-founder of the nonprofit San Jose Rocks organization — said the show was conceived at Byrne’s December memorial service. Orloff learned from Byrne’s daughter Tina that the family had been left with massive medical bills, a daunting mortgage and no insurance. So he huddled in the parking lot with fellow San Jose Rocks board members and musicians from the Count Five and Syndicate of Sound.

“We all said, ‘We’re putting on a benefit,’ ” he recalled. “It took all of three minutes.”

Radio veteran Mark Fenichel, who will stage-manage the event and perform with the Jon Lawton Acoustic Duo, said he hopes the event will raise $15,000 to help Dagmar, Byrne’s wife of 37 years, and the couple’s four adult kids.

Fenichel tracked down rock and sports memorabilia for auction items, including autographed guitars from Bruce Springsteen and the Rolling Stones, and contributions from merchants such as Guitar Showcase and Guitar Center. Mike Jafari of Avalon offered his club for free, with all the proceeds from the door going to the cause. DJ Laurie Roberts, recently let go by KUFX, signed on as master of ceremonies.

The evening will pay homage to Byrne, but it also will celebrate an era when South Bay musicians, most still in their teens, reached the masses with hard-driving songs birthed in garages and honed in sweaty gigs at the Continental Ballroom or the Pioneer High School teen center.

Closing the show will be members of the Chocolate Watchband, a group that never scored a hit but today is revered as one of the toughest, most exciting bands of the era.

“It’s a pretty amazing thing to get parts of those three original San Jose bands,” said South Bay music historian and journalist Jud Cost, who became friends with Byrne when he wrote liner notes for a Count Five compilation in 1994.

Forty years down the road, assembling complete original lineups is no longer possible. Byrne is gone, as is original Count Five drummer Butch Atkinson. Syndicate of Sound lead singer Don Baskin is ill and unable to go tonight. Chocolate Watchband frontman David Aguilar, a noted astrophysicist, is off lecturing in New Zealand, leaving drummer Gary Andrijasevich and guitarist Tim Abbott as the only vintage members for this show.

Fortunately, these musicians have talented friends. Gene Mason of the group People! will sit in with the Syndicate and surely sing his old band’s big hit, “I Love You.” Rock historian Alec Palao will play bass with the Watchband. And original Count Five members Ken Ellner, Roy Chaney and John “Mouse” Michalski will be joined by friends like Dorise Hunt, a singer for Chaney’s post-Count Five project, the Count.

But the night isn’t only about memories. John Byrne was making music right to the end. His last track was “John Joseph Jesus,” a collaboration with the San Jose hip-hop group Rhymetite, which will kick off tonight’s show with a set that includes the live debut of Byrne’s swan song. Fenichel will reprise his harmonica part from the recording.

“It’s not what John would usually do, but I think he was trying to do something a little different,” Dagmar Byrne said of the song. “He was always open for new ideas.”

Tina Byrne said her dad would have been “flabbergasted” by the outpouring of support.

“My dad didn’t realize how many people he touched,” she said. “It’s incredible. I’m really, really proud to be part of this whole thing.”

Contact Shay Quillen at [email protected] or (408) 920-2741. Find more of his stories and a link to his blog at www.mercurynews.com/shayquillen.

With members of the Count Five, Syndicate of Sound and the Chocolate Watchband
When: 7 to midnight tonight
Where: Avalon, 777 Lawrence Expressway, Santa Clara
Tickets: $25 at the door; cash donations can also be made to the John Byrne Memorial Fund, Box 5415, San Jose, CA 95150 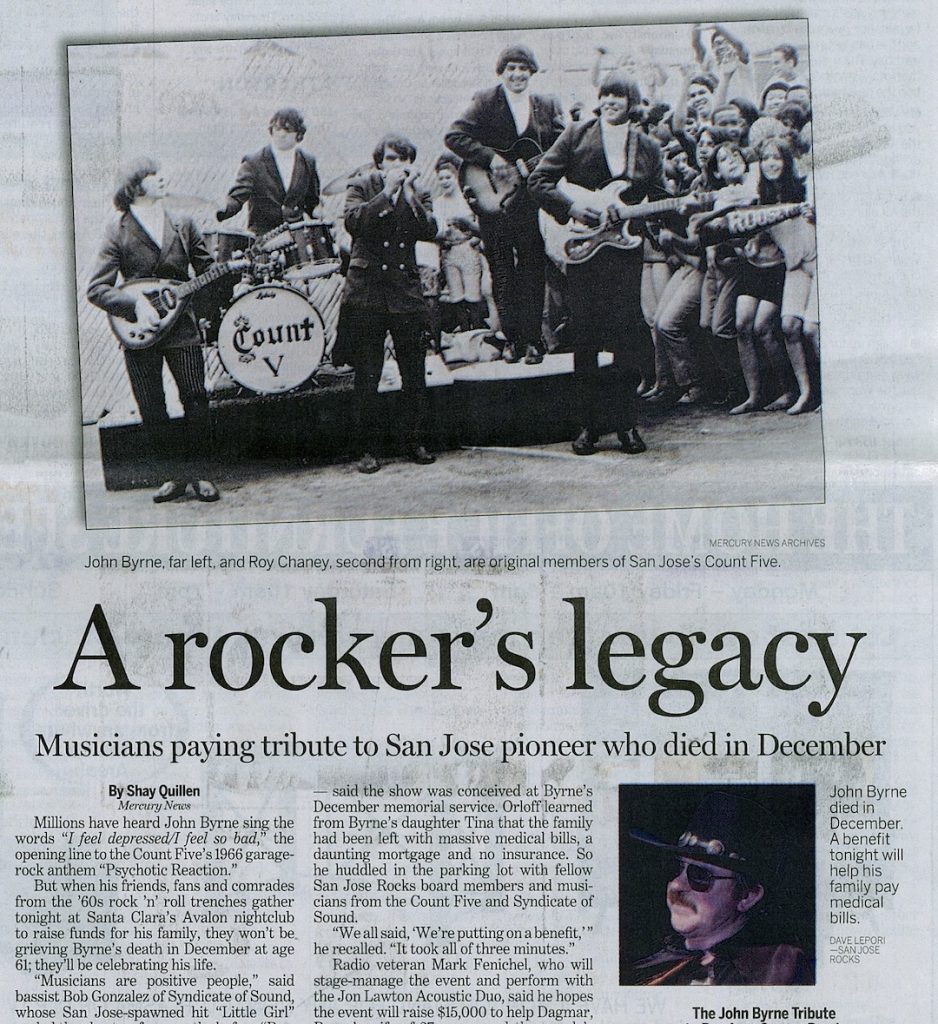