South Bay Deserves Much of the Credit Accorded S.F. for '60s Bands

Injustice is never pretty, even when it’s psychedelic.

A few years ago, local attorney Kenn Ellner visited the Rock and Roll Hall of Fame in Cleveland. He sat down to view a movie tribute to San Francisco’s “Summer of Love” in 1967. In the film’s opening seconds, a distinctive fuzz guitar and harmonica riff floated across the soundtrack.

Surely, you know the answer. The situation was no different 35 years ago when the Count Five rode their song — which reached No. 5 on the Billboard chart — to appearances around the country.

“They would say we were from San Francisco because they didn’t know where San Jose was,” remembered Roy Chaney, the band’s bassist.

Makes you want to smash some guitars, doesn’t it? Everyone knows that San Jose’s inferiority streak can run deeper than Keith Richards’ wrinkles. In this case, there is a legitimate beef. 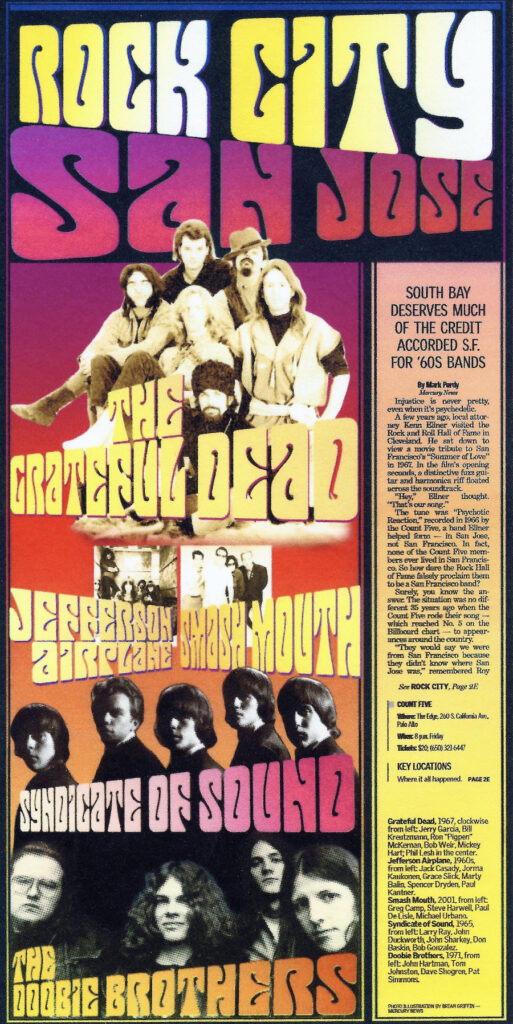 Say it loud: We’re Area Code 408 And We’re Proud. San Jose’s rock ‘n’ roll history is as thick and as significant as any city in America. But few people realize this, because nobody makes movies or television specials about it — or writes newspaper stories about it.

Time to correct the error. Friday night, the Count Five will play its first show in 16 years, a reunion gig at The Edge nightclub in Palo Alto. What better occasion to step up and scream about San Jose — and the South Bay’s – — neglected rock ‘n’ roll reputation?

There is a ridiculous amount of screaming to do. Two of the alleged “San Francisco” bands — the Grateful Dead and Jefferson Airplane – were populated mostly by South Bay musicians. In fact, the Grateful Dead’s first appearance under that name happened in 1965 in downtown San Jose. Bob Dylan played a show in San Jose before he ever sang in San Francisco. Half of Creedence Clearwater Revival attended San Jose State and honed some chops there. Influential groups such as the Syndicate of Sound, People, Chocolate Watchband and Harpers Bizarre had South Bay roots.

And that only covers the 1960s. During the 1970s, the Doobie Brothers smoked themselves out of a house on 12th Street to sell millions of records. Stevie Nicks, another former SJSU student, gave Fleetwood Mac the witchy pathos to sell millions of records. More recently, Smash Mouth broke out of the South First Street bars to gain international fame.

So which city is it, again, that deserves to be called the Bay Area’s capital of rock ‘n’ roll procreation? Tourists in San Francisco routinely visit Haight-Ashbury to gaze at the Grateful Dead’s “birthplace.” Maybe they would be interested to know that Jerry Garcia and Bob Weir first began plucking guitars at Palo Alto music stores and coffeehouses.

Granted, today’s live music scene in San Jose is struggling. But cycles repeat themselves, and the young local musicians could do worse than study their ancestors. The reconstituted Count Five at Friday’s show will feature three members of the original band — Ellner, Chaney and guitarist John “Mouse” Michalski — along with guitarist Phil Indovina and drummer Rocco Astrello. Original drummer Butch Atkinson has died, and original guitarist John Byrne decided to decline a full-fledged reunion but has been invited to sing a few songs with the band Friday. Don Baskin, the Syndicate of Sound’s lead singer, may also show up for some guest vocals.

And don’t worry. The Count Five’s trademark Dracula-style capes, worn by the band for a famous jacket-sleeve photo in front of the Winchester Mystery House, will also be on the bill. Michalski kept the original capes in a closet at his house, ready for use when Chaney sparked the idea for a reunion before they get too old.

“I just called up the guys and told them, `If we’re ever going to do it, now’s the time,’ ” said Chaney.

The idea, he said was goosed by a British company that has just released a CD featuring the remastered original master tapes of Count Five recording sessions. They’ll also be on sale at the show. In the comprehensive CD liner notes, Byrne properly disses the San Francisco bands by saying: “Those groups from the city always looked down at the South Bay and treated us with disdain.”

Not after today, they won’t. 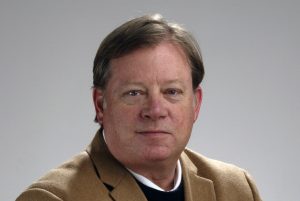 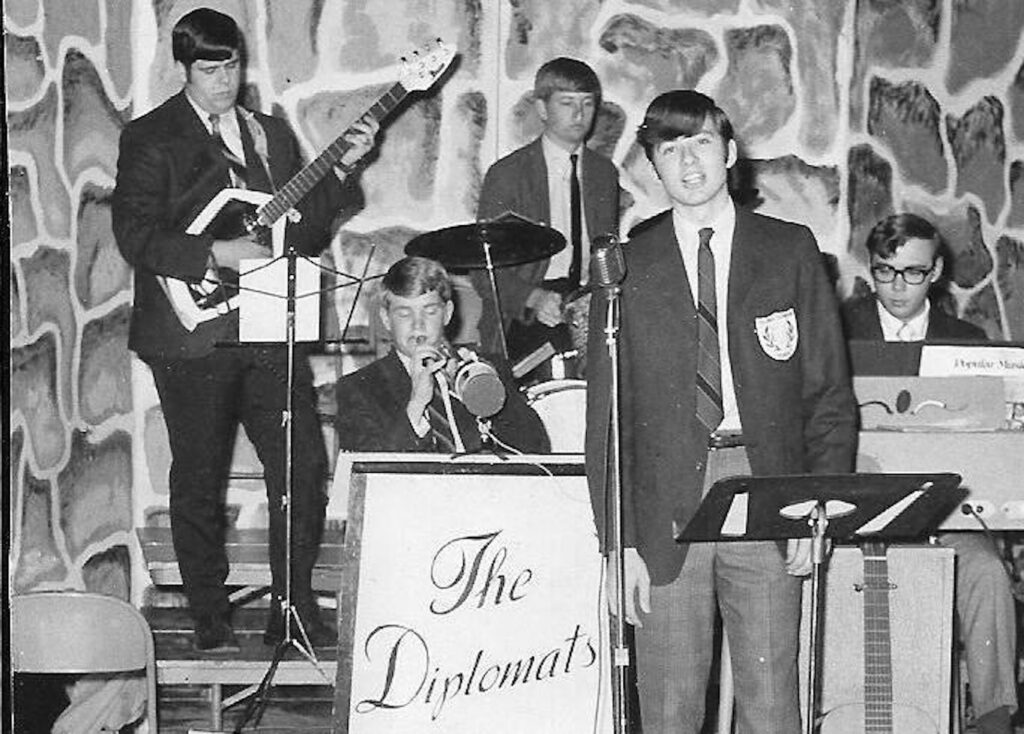 High school student Mark Purdy plays the drums for the hottest young band of 1969 in Celina, Ohio — the fabulous Gary And The Diplomats. Believe it or not, they actually covered the song, “Do You Know The Way To San Jose.” 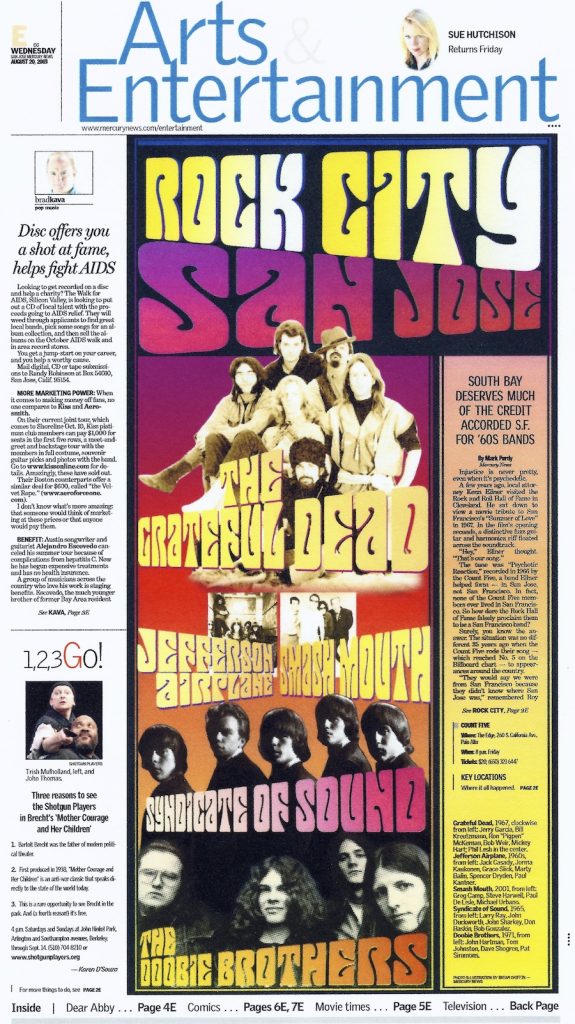